On a recent visit to Ireland, where my wife’s family lives, I was treated to a delicious centerline of Connemara Lamb at the Pullman Orient Express Restaurant in Bushypark, Galway.

Famed for its fertile soil, fresh seafood and free-range meats, Ireland quietly started its culinary transformation during the 1970s when cheesemakers including Veronica Steele, Giana Ferguson and Jeffa Gill, along with organic food farmers like Rod Alston, started paying attention to quality — not quantity — in their products.

Later, as the country’s economy began to boom, chefs from all over the world began flocking to Ireland for work.

“The change in Ireland’s cuisine is due to the influence of the different cultures that now live and work in Ireland,” said Laurent Janot, executive chef at Glenlo Abbey in Bushypark, Galway.

Janot, who has worked in France, Switzerland and Australia, still loves traditional Irish dishes such as bacon and cabbage and Irish stew. “But I place a lot of emphasis on quality,” he said. “My cooking motto is to use fresh quality produce at all times that require as little preparation as possible.”

Janot and chef Ciaran Gantly specialize in fresh Irish produce and meat cooked to order with a modern twist. During our visit, some of the signature items on the menu included a Salmon Roulade on a bed of aubergine (eggplant) caviar and vermouth sauce and this Centerloin of Connemara Lamb topped with black olive crust and red and yellow bell pepper coulis. 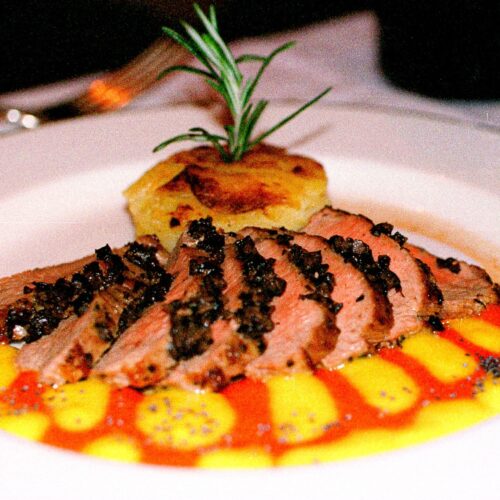 Hi, I’m Jason Hill, host of YouTube’s “Chef Tips” series. I graduated from culinary school in 1998, and gained my experience working the lines in Southern California. I launched my cooking videos in 2007. I love sharing quick and easy recipes that get people back in the kitchen.

Be sure to subscribe to my Chef Tips channel on YouTube so you never miss a new video!